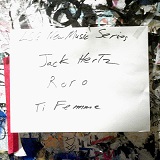 We welcome Jack Hertz to our label,with a really great Live album.
This music was performed live at the Luggage Store Gallery in San Francisco, California December 12, 2013.
Jack Hertz performed two live improvised microtonal sets played live on the 6x6: An array of six FM synthesizers.
No loops, samples, sequencers or recordings were used. Everything was generated live in real-time using FM synthesis.

Inspired by the mystery of life.
I manipulate sound to create intangible techno-organic impressions between music and noise.

Jack Hertz has been playing, composing and recording experimental music for more than 30 years.
My first experiments with sound began with analog reel machines, microphones, percussion and a Casio VL-Tone.
My first true synthesizer was the Alpha Syntauri digital synthesizer that was was hosted by an Apple IIe PC.
The steep learning curve exposed me to a universe of concepts nearly a decade before others. Soon after,
I was introduced to Yamaha's DX7 and the vast capabilities of FM synthesis that I have been working with ever since.

Uploaded by Petroglyph Music on January 5, 2014